On Thursday, October 10, 2019, Rick Mandile, SAGE’s CEO, chaired and moderated the Annual Environmental Business Council (EBC) Meet the Chiefs event, co-hosted by the ACEC and RISEP. The event was held at RIDEM’s headquarters in Providence, located along the ever-improving Woonasquatucket River.

This is the third year that RIDEM and EBC have held the event, doubling in attendance each year. This half-day forum uniquely brings together Deputy Director, Terrence “Terry” Gray, and the Department’s Section Chiefs. Each chief presented a brief overview of his or her previous year’s challenges and successes and what the consulting/engineering community and other environmental stakeholders can expect from each of their departments in the coming year.

As Rick introduced Terry and his chiefs, he noted the vast amount of institutional knowledge that stood in front of the audience. Each chief holds 30 years or more of experience, representing a combined total of over 250 years of RIDEM expertise. As the audience absorbed this fact, the floor was given to Terry to begin the event.

Over the last year, the Department’s permit and project volumes have increased by over 25%, Terry reflected, a sentiment that was notably echoed by the audience and their experience. With the Rhode Island economy chugging along at a marathoner’s pace, the message for the coming year was optimistic. New staff has been added to help fill the gaps left by retired experts, along with the continued refinements and focus on aligning each Department with RIDEM’s mission. 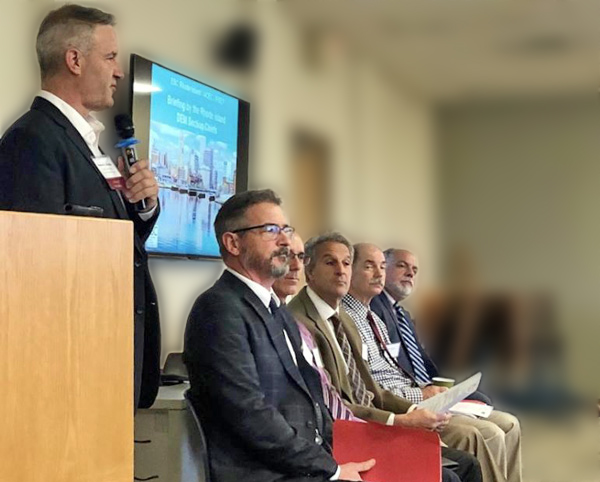 We'd love to hear from you